PAADHAI came into existence following the worldwide shock provoked by the devastating Asian Tsunami in December 2004. Crossing frontiers, there was a wave of sympathy and for a brief period, there was overwhelming worldwide solidarity.  The cataclysm also brought out the complexities in extending direct help to local populations.

There were serious queries on how one could get involved in long-term support and rehabilitation. One of the critical aspects was that the support extended be direct with minimum intermediary loss. At this point, a network of people with different national identities joined hands with a strong will to bring their energies together, into a significant endeavor and a meaningful commitment. This gave birth to PAADHAI.

Initial efforts were on education centers for Dalit villages around Tiruchendur (Tamilnadu). These were supplementary education centers which helped tutor the children of these villages. They also acted as a community center for women and children. Most of these centers were used by the women in that region for operating self-help groups and to run micro-credit programs.

Over the years, PAADHAI has expanded its projects towards Community Based Rehabilitation efforts, Tribal schooling, Mental Health in Rural villages, Production centers for women, Placement of challenged people in Urban Industries, Nature conservation and other Environment related projects. These project implementations have been realized through local partnerships with dedicated and effective NGOss and their relentless efforts. 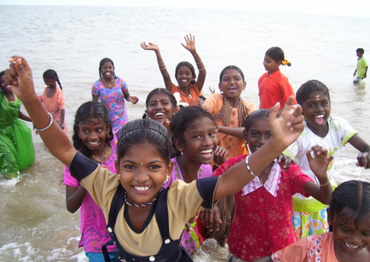